Find me on the web

Hands down the best weekend in a while! Why? Because it was an amazing experience at Startup Weekend Cluj.

My best friend Cosmin insisted that we go. I wasn’t sold, but thought what the hell… why not? So we bought the tickets a couple of weeks before and then started to think a lot about an idea to pitch. That’s when it got interesting. One day we decided on something, then by the next day one of us had arguments that it would not work. So back to the drawing board. And this happened again and again. It can drive you crazy. Actually, one night I got so excited over an idea I couldn’t go to sleep. That had not happened to me for some time.

Friday afternoon I was super-anxious. Both Cosmin and I were in the conference room going over the 60 seconds pitch. We went through several drafts and then I pitched in front of our colleagues. Bad news, they didn’t understand it. But I got a lot of suggestions: say this, don’t use that, look at the audience, be relaxed, speak faster, speak slower. By the way, this was 90 minutes before we had to leave. Now what? Let’s rewrite it. Ok! And we did. I tried again and this time my colleagues said “much better”. (btw, thanks for your feedback guys)

We packed our laptops and went to Startup Weekend Cluj. When we got there we were among the first to arrive so we picked a table. As people started to come in we got company and learned from others how it was last year and the year before that, but we were still not able to relax.

It is important to say that the host of the event was Vidar Andersen. He is one of a kind. Great speaker, packed with energy, quickly managed to get me out of my discomfort zone and into a new zone that I now call startup fever :))

After Vidar told us about the event, the rules, the speakers, the sponsors and the organisers we lined up to pitch. The second I got off my seat I forgot everything I rehearsed. Yeah, I know. Talk about shitting ones pants. So as I came closer and closer to the microphone I knew I had to forget about my original pitch, stop trying to remember it, focus on the idea, try to stay calm, do my best. So I took the mic, I pitched (video), I went back to my seat, looked at Cosmin and got a thumbs up from him. So was it good? It better be. Truth be told I wasn’t able to focus on the other pitches that much. I was waiting for the voting to see if we would actually get picked.

The voting coincided with dinner, so in between pizza slices everybody was talking to everybody and putting up stickers on their favourite projects. While all we were doing was keeping our eyes fixed on that sheet of paper with ontopic on it.

During the voting we met our first team member, Cristi. He is a professional blogger, Broadcast Media Consultant and Project Manager for some of the big names in the Romanian news industry. I approached him right after he gave ontopic his vote and we discussed about the idea. Cristi found our designer, Horea. This was major, because designers are very hard to find at Startup Weekend. As the team was growing, so was my enthusiasm.

Like everything else so far, things were about to take a turn. Vidar announced that there were 4 teams that did not get enough votes and which would have an extra 30 seconds to convince the entire audience. Only one team would get picked to continue as part of the competition. Guess what? We were part of the 4 teams. So once again I found myself holding the mic without having any idea what I could say in half the time to get the popular vote (that’s when people yell, applaud and cheer). It did not happen, we did not get picked.

But we had a team. And at Startup Weekend you don’t need to get picked in order to work on your project. So we were being given the chance to be rebellious, to compete outside of the competition, to disregard what others voted. Awesome! Now that we were set to continue no matter what we got another break. Nico, Brand Manager and Marketing specialist, joined the team. Five people with the skills required to make it or break it.

We ended the day by bringing up Horea’s hardware.

Most people were going home, but it looked like we were moving in. And that’s how the first day ended.

It was roughly 9am when Cosmin and I got back to Exclusive Catering (that’s where Startup Weekend took place). We had a quick breakfast during which the rest of the team arrived. We did a quick recap of our idea and then we decided which mentors we’d like to talk to during the first half of the day. Our choices were Robbert Visser and Calin Fusu.

Robbert listened patiently and then told us that our idea, to have people create content and then be recommended to each other based on their current interests, is a long shot because there are very few people that actually write on the web compared to the ones that only read. He gave us examples from his own experience where people are reluctant to even click a button, let alone write a paragraph. But he did suggest that we could build a platform that gives the reader a small amount of high quality content that is very relevant to his interests.

We brainstormed a bit on this idea and then Calin came to talk to us. He quickly showed us a couple of apps on his phone that were doing something similar for free (!) and made a good point that monetising it would be very difficult. After going back & forth we got a suggestion from him that we could have famous people post content on their topic(s) of expertise and readers would most certainly be interested to read that. However, the problem would be to get famous people to move away from their existing blogs. Slim chance of that happening.

To recap: we came with an initial idea, then we went through 3-4 more ideas and it was already noon when we realised that we’re running out of time. Decision time! Let’s build an engine which shows relevant content based on a user’s preferences. Think of Google Ads, but instead of ads we show content from your website that is relevant to the reader based on his reading preferences/habits from other websites. Why do this? Because the reader gets content that might be buried deep into your site without having to search and you keep the reader on your site and reduce bounce rate.

Ok, that was it. We started working. There was no more time to pivot. We set up a couple of test blogs, wrote a WordPress plugin, set up and API using the MEAN stack, designed a logo. It was non-stop work until dinner. After that we just felt burned out. It had been a long day, with ups and downs. We knew that Sunday was going to be the real effort.

The previous day we picked a corner table and because there was room to spare we turned it into a co-working space for us and the Tooth Fairy team. I had no idea that by the end of the weekend I was going to have so much fun with these people and charge myself with a huge amount of positive energy. So true what they say: it’s all about the people.

Around 8-9pm we simply stopped working and turned our room corner into a bit of a stand-up show. Joke after joke we even got some of the people from the other teams to join our little fun pub. The diversity of people (with their ideas and experiences) that I found at Startup Weekend was amazing. Since I was coming after a full week at the office I expected to be dead tired after the weekend, but to my surprise it did not get to me. Somehow I managed to combine work with fun. You know, like a real startup

Hold on, it wasn’t just fun. We also helped one another. Below you can see the Tooth Fairy “product manager” testing their app on me: 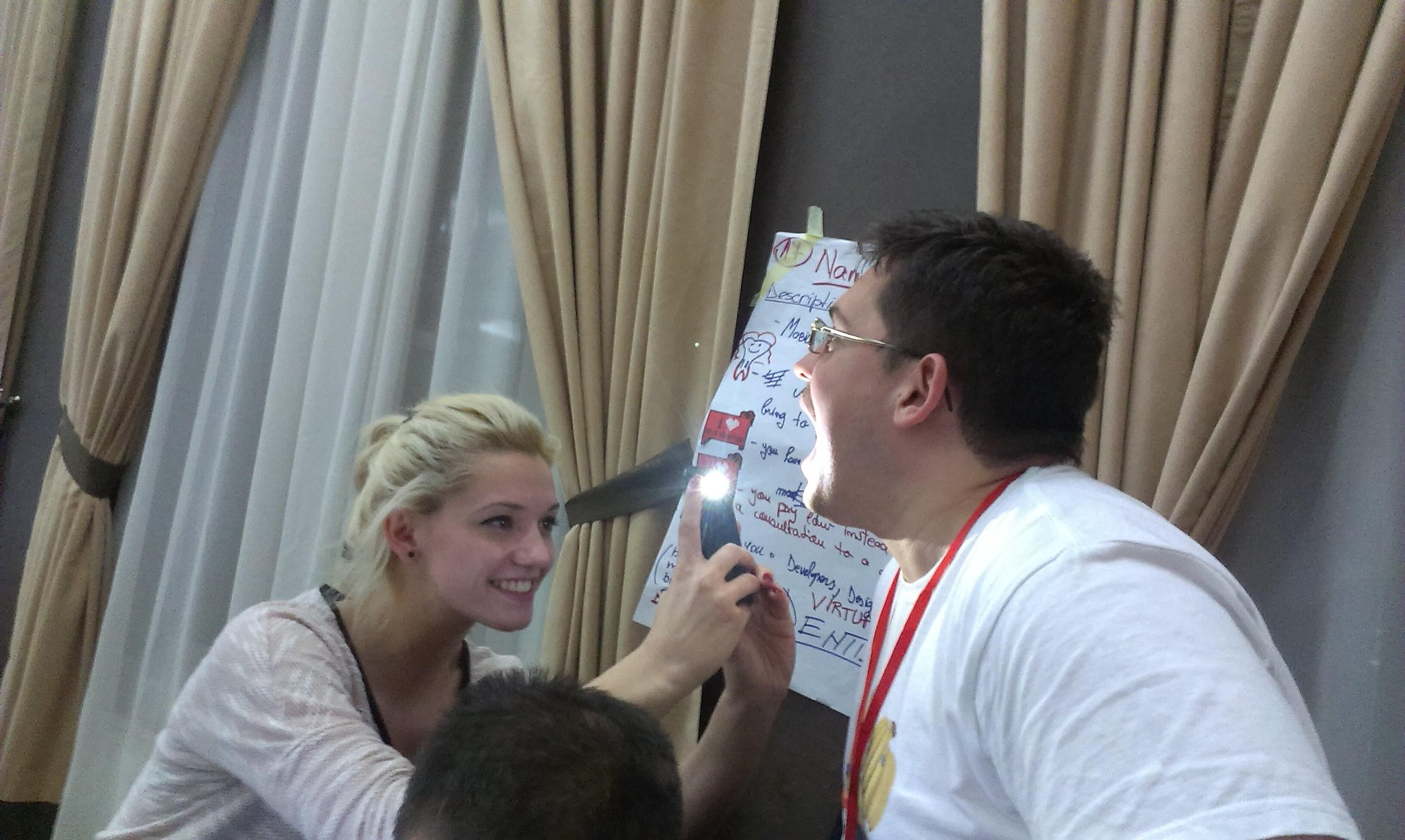 Around midnight we decided to end the 2nd day of Startup Weekend Cluj.

This song describes the feeling all throughout Sunday.

Not just us, all the teams. The deadline was 5pm. That gave us 8 hours. No more, no less.

There was no plan and no time to make a plan. All work, no breaks. The organisers had to turn up the music (and play a really annoying song) just to get us to have lunch. Although there was no way we could try to even slightly change our idea we decided to get some last minute feedback and asked Patrik Jansson to come to our table. Patrik did not have much experience with content delivery and analysis so he wasn’t really able to validate or invalidate our product. Even so, we kept working. Time was too precious to consider calling another mentor.

In the afternoon, around 3pm, the organisers announced that there would be a test-pitch session with a few of the mentors. Sort of like a trial run to improve our presentation skills. Our PPT wasn’t ready yet, but that didn’t matter. Some slides were ready… great! As for the others ones, I quickly added some white pages with text on them. Next I moved to the other room and waited in line to do my trial-pitch. How was it, you say? I got great advice and it boosted my confidence. The best part was that they did not have negative comments about the idea. In my mind that meant that this time we probably have something valid. While I was doing this my colleagues were doing research to finish the PPT, created a site for the project and ironed out the last details for the demo. Talk about team work.

By the time I got back to my team it was 4:30pm. We did some last minute testing, then I had to go and make sure that my laptop worked with the projector (that costed me 10 precious minutes). Then it was “pencils down”. Pitches were going to start… randomly. We got picked during the first half. Once again I had the mic. It was a tad too much public speaking that weekend compared to my regular weekends :)) but I can’t say I didn’t like it. The judges paid attention during the pitch, some of them seemed interested, others weren’t buying it (especially the financial predictions), but at the end we got positive comments. Totally unexpected for a team that did not get picked on day1 and had their idea shattered on day2.

Let’s not forget that we were not competing for the actual prizes. Why? Because those are the rules. If you don’t get enough votes on the first day you can still work on your idea and pitch it, but no prizes. Am I sorry about that? Not really. I did not want the Macbook Air, the iPad, or the iPhone. But the paid trips and access to accelerators and conferences all over Europe big YES.

Congratulations to the winners! I hope they make the most out of the ideas and the products they have after #swcluj.

In the end this is us, the ontopic team, after 54 hours at Startup Weekend Cluj: